The evolution into a full-time creative. 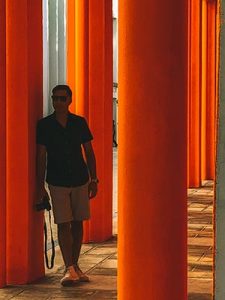 I’ve had a long, successful (though sometimes stressful) career in management consulting. It has afforded me the opportunities to travel across 45 countries, six continents, and cross off many items on the bucket list before I ever expected.

But the inner hunger for the visual arts has only grown stronger. I recall the days I would be sketching concept cars in my childhood, taking inspiration from Car and Driver magazine. In University, on some nights–all night long–I would sit in the computer lab, scan hand drawn sketches and morph them into posters in Photoshop.

While art has always been more than a hobby, being made “redundant” recently from a management consulting position of eight years was the trigger to go independent full-time.

I didn’t know how I would replace my lost income stream. I just knew that I couldn’t be a slave to The Corporation any longer. Bowing to the whims of senior management only concerned with the shareholders, could not continue.

The Universe had spoken. Go with your inner voice. Chase your dreams, not a job.

A little background on the prints. 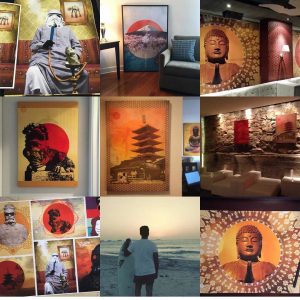 It all started as an exercise to make unique art for a living room in a recently acquired apartment. Then another for the hallway. And the dining room, and well, another for the living room. Soon, the apartment was brimming over the rim with canvas prints. So, I started traveling with my latest prints around the World, which lead to solo art shows, bespoke commissions for homes, hotels, and restaurants, and here we are. It’s all been very fortunate–being able to create and share.

I take inspiration from my travels, and design styles from Eastern and Ancient cultures.  Subsequently, many of my prints have a distinctly Japanese or Middle Eastern influence in their imagery or reverent messaging.

My most noteworthy print series is called The Art of Zen which is reminiscent of the traditional Japanese woodblock prints and the Ukiyo-e style.

Specifically within this series there are three prints (Fujimar, Northern Lights, and Flower, Bird, Wind, Moon) which are inspired by the the Japanese artist Hokusai Katsushika, who is known for his Thirty-six Views of Mount Fuji print series. One of the most recognizable prints of that original series is The Great Wave off Kanagawa which is often seen on wallpapers and apparel.

Another great print series you should checkout is The Age of Innocence. It consists of three beautiful design which celebrate the bonds of family and the years of childhood.

There is hardly a time I enjoy more than realizing my ideas into a visually tangible form such as a sketch or print–well except, maybe, traveling to a new city.

Getting started in film.

I wanted to take this further—to graduate into the world of moving images where storytelling is far more compelling and consumable than its print counterpart.

In 2013, I entered into a competition sponsored by the UAE based studio Image Nation, by creating a 3 minute experimental film, based upon which I was selected into a 3 month film program. 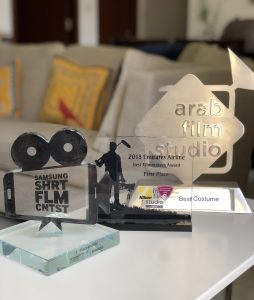 Arab Film Studio gave me the opportunity to develop, where I was the only member with no film or media background, yet I excelled at it, and while not taking home the Best Film prize, I was fortunate to have an award winning film Rendezvous screened as part of the final six films.

Keeping with the theme, the next year I entered into the Samsung Short Film Competition, part of the Dubai Film Festival. Here, my film Salesman of the Year, was awarded third place at the official Dubai Film Festival awards ceremony.

I was on to something, and I haven’t looked back since.

My latest initiative is Artists at Large–a not for profit platform that promotes emerging artists, by producing stylized short documentary films about the artists’ backstory, struggles, inspiration, and their body of work. It is mean’t to inspire other budding artist’s to keep creating and persevere in their craft.

At the end of it all, I am a visual storyteller. That is my forte.

Thank you for your support.